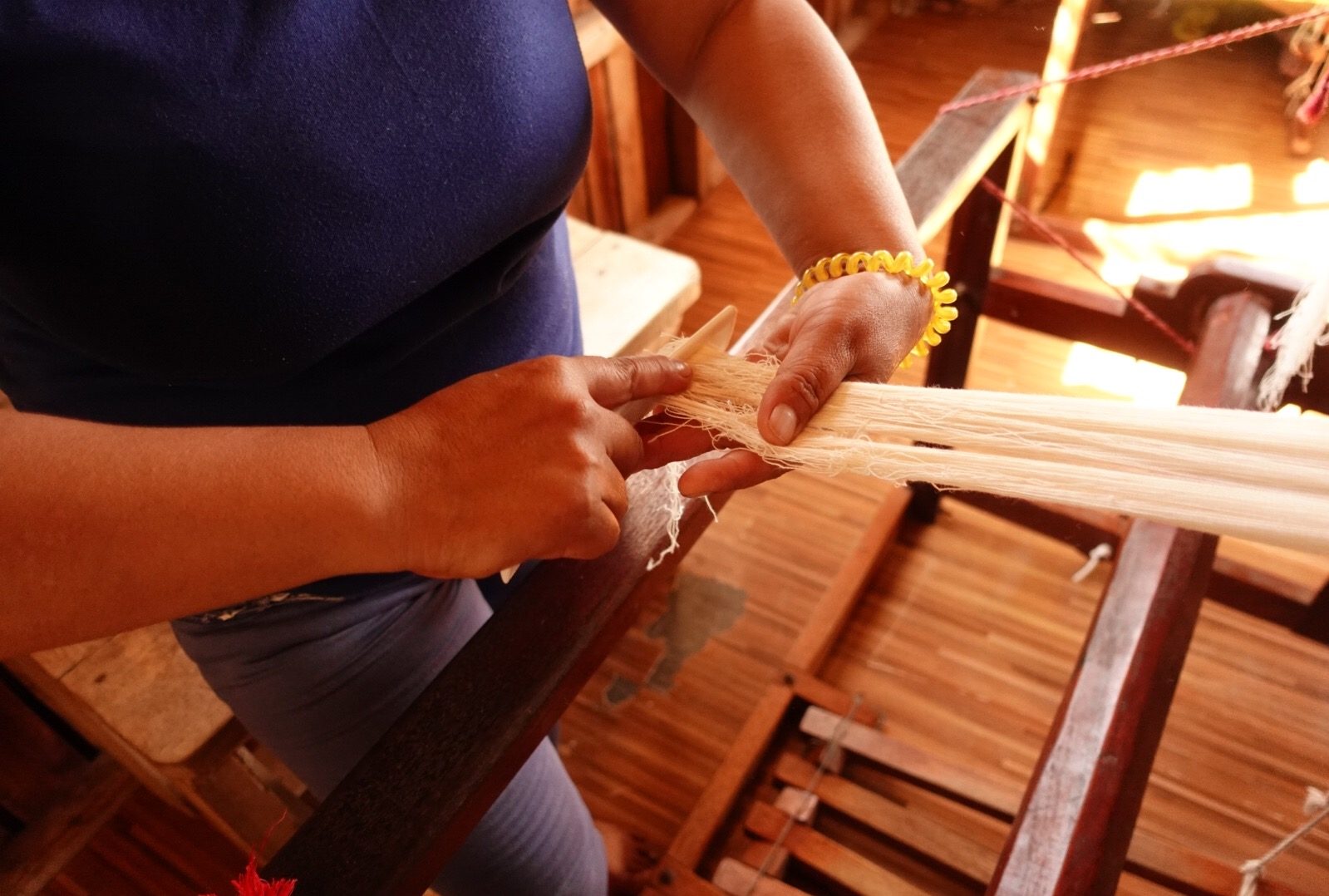 By: Gabrielle Uy Philippine Daily Inquirer / 04:05 AM November 30, 2019 Their craft sustains a community and a future

Jonathan Medes slides a shuttle between feathery layers of cotton. Wooden shafts shift and click as weather-worn pedals creak rhythmically beneath his bare feet. Sunlight spills across his shoulders and onto the beginnings of a diamond weave, glazing the loom before him in gold.

In 2012, this small community of weavers was established as a livelihood initiative with the aid of Fr. Brian Gore and local government agencies.

In 2017, it officially partnered with Creative Definitions owners, the couple Mike and Banj Claparols, to enhance product development, marketing support and environmental sustainability.

Today, weaving continues to provide steady income for the inhabitants of Kabankalan’s remote mountains. The air pulses with the beating of beam against warp, tasting of petrichor and Bacolod’s sugar plantations.

“I used to work out there as a rice farmer,” says Medes, who turns his gaze to a nearby window, shuttle still in hand.

He sets down his shuttle for the first time since we arrived and gently runs a finger along the perfectly straight, paper-thin edge of the weave before him. “This is the most important part. If this gets ruined…” He smiles ruefully, his voice trailing off. He picks up the shuttle once more.

Weaving isn’t easy. As Father Gore tells us on the rough drive up the mountain’s dirt road, “It isn’t everyone’s cup of tea. It would drive me crazy.”

He chuckles and shakes his head as he recounts the center’s earliest days. Of the original 20 weavers, only two were able to handle the stress of stringing thousands upon thousands of delicate threads that could fracture instantly beneath impatient fingers. People trickled in and out of the weaving center and seven years later, the community of nine remains small and highly skilled.

“That’s why the government program to teach weaving… it’s not… effective,” says Mike. “They’ve been putting up training centers around, but you have to choose the right people to do the weaving.”

Moreover, finding a reliable source of demand for handwoven textiles is a challenge. Recently, a large-volume order for sablay from a local university has kept their looms in constant motion.

“If we start getting orders every year for sablay and all that sort of stuff, we can get more people weaving… [We do] whatever we can do to help the people income-generate.”

Father Gore defines the primary objective as providing the weavers with a reliable, fair source of income. The Claparols raised the weavers’ average wage from P50 to P160 per meter.

Sales proceeds also directly support the Colambo Primary School’s feeding program, where the children of Kabankalan get free lunch from Monday to Friday for 200 days in a school year.

Marialyn Abria paid for her Licensure Examination for Teachers through the textiles she wove in her spare time. Many of the older, full-time weavers funded their children’s primary, secondary and tertiary education in a similar manner.

Ultimately, weaving has changed and continues to change several lives.

Meanwhile, the young Medes himself has only a high school diploma. As he briefly mulls the prospect of going to university, a mix of boyish wistfulness and a look of resignation beyond his years flickers across his eyes. “I’d love to go to college, but there isn’t any money.”

Nevertheless, with savings he had from half a decade of weaving, he was able to build a house for himself, his wife and his 4- and 5-year-old children. “D’yan na lang sa mga anak ko, ibuhos ko lahat.”

Smiling, he resumes his work on the weave on his lap. We sit in silence for a moment, the drumbeat of the looms reverberating in the room.

By the time we leave the weaving center, the first rays of sunset stain the abaca-dyed ropes on the walls an even deeper shade of red. Goodbyes are lighthearted and languid, especially for Father Gore, who is seen off by a small entourage of the center’s pet dogs.

At his request, we drive back down the mountain with the windows down and the radio off. We pass the Negros Nine’s 60 hectares of reforestation project, the Colambo Primary School and a bright blue house with the 4- and 5-year-old children.

According to Mike, there is still work to be done. He is one of many social entrepreneurs collaborating with the Philippine Textile Research Institute of the Department of Science and Technology to develop more sustainable, uniquely Filipino fiber blends.

He also hopes to increase the number and size of their looms to allow for more complex weaves, and hopefully, produce a signature design of the Negros Nine.

“I just hope we can sustain all this,” he sighs.

As day fades to twilight and the mountains fall away, I can’t help but hope so, too.

Email: theloomproject.ph@gmail.com
Hours: Monday to Saturday 9am – 5pm except holidays